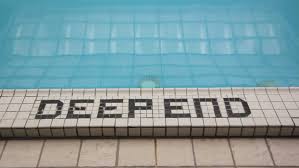 A busy weekend that started with a carpeted church, moved on to an orchestra rehearsal, before finally finishing with a full day in the pool. The pool was the public one and into this, on a freezing Sunday morning, the collective youth of Yorkshire were plunged.

Let’s get this straight, this is not a mass baptism; it was a swimming gala. This type of event roughly translates into a baptism of boredom for all those adults not anointed with the perfumes of parental competition. A day’s races including front, back, breast, and four-stroke. Some of the kids seem to have outboard motors attached to them as the race through the water.

We had come to an an agreement; I would do the morning stint and my wife would do the afternoon one. Mine was one hour shorter than my wife’s, but in gala terms that equates to three weeks and four days. Still, it was set to be an ordeal that even Hercules may have struggled with.

“You need to take off some of those layers,” Sonya advised me.

“But it’s freezing outside.”

“Up on that balcony is like being a sauna.”

I had taken a small library of books in a rucksack and at the last minute decided to read C J Sansom’s Dominion. This was rather apt as it was a tale of what could have happened if the Germans had won the second world war (rather than Coca-Cola). I always think that sporting clubs for kids become organisations for adults to practise their dreams of running the world.

Anyway, I sat down next to a guy who shares the first name as me. This makes it easy to remember each other.

I then exchanged a few pleasantries about a recent operation he had undergone and, after an appropriate amount of time, I started to read.

With all of the goggles on, it is quite difficult to tell one ‘bug-eyed’ Martian swimmer from the next, so I relied upon Mike (the other Mike, not me) to tell me when my daughter was up next. As the race started, I suddenly became aware of how much noise a group of fearfully competitive parents can make. The sound of:  “Come on Hayley!” “Go for it Kirsty!” or “Push yourself” tends to reverberate around the cramped and steamy conditions. Just a short blast of this set my nerves on edge.

There was one woman sitting behind me who had the lungs of a dairy herd and boy did the use them. I looked around trying to understand the collective madness, but then returned to my book.

10 thoughts on “Hold Your Breath…”