There have been times down the decades when I have written something that I have considered as close to perfection as I could get. Being perfect, I placed it in the sarcophagus of almost forgotten memories only for me to stumble upon it years later.

Time is a deceiver, but it can also be a revealer. 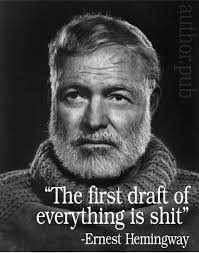 He wasn’t mixing his words was he?

Writers grow from rewriting. Sometimes it takes a day. Sometimes a month. Sometimes decades. But the truth will out.

What had once been revered as a work of neo-genius now appears for what it really always was, a half-baked, half-thought that had been woefully half-written.

Good writing is not a natural ejaculation of all that pent-up emotion, passion and desire that lies achingly dormant within us. If so, it would be gone in the moment of release, its importance spent, its significance lost in the moment of its creation. Good writers are like sculptors, they see an idea, they wish to capture it, but first they have to start chipping away. Without the second part, the idea is merely a stone in the eyes of the world.

Nothing exemplifies this more than the work that he was rumoured to have participated in, To Kill A Mockingbird. I have posted on this before and have mentioned that I thought the ‘original’, Go Set A Watchman, was half-decent. It was, however, not the finished product; it was a work in progress. Without the rewriting, nobody would have ever heard of Atticus Finch, Boo Radley, or Tom Robinson. Personally, a huge chunk of my moral compass would have been missing. Instead of North, South, East, and West, I may have only had North and South, or East and West, or even two Wests.

The fact is that without the rewriting, all of these points of importance may have failed to appear, leaving me directionless and drifting in the indifference that regularly inundates the world.

Now, I have been on a little venture of my own these last two years. I have been working, travelling, cycling, writing and rediscovering. And in all of this, I have been creating.

A couple of days ago, I went back to my stone and started to chip away at it. Rewriting had never been one of my favourite pursuits, so it was with surprise that I found myself enjoying the seven or eight hours that I spent with my mallet and chisel. I have, in fact, done this type of thing before to, my rescue piece, Read After Burnout, and I thought that I had rewritten the living shite out of it, but eh?

I am going to spend a chunk of today doing the same thing.

The truth of it is that I am enjoying the journey. It is taking me back to the moment of writing and reacquainting me with those significant thoughts and events that inspired me to write in the first place. I am pleased that I am laughing so much at things that I intended to be merley wry. I am happy that much of what I wrote stills stands up long after the tsunami of realisation first swept over the page. I am relieved that I am finally becoming a writer.

Now, I shall have to proof-read this to prove my claim…

3 thoughts on “All Writing Is Rewriting…”