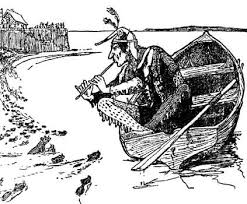 If there was such a thing as a happy history teacher, then Graham Hunter was it.

Or he should have been.

There was nothing more engaging than a real life puzzle to be asked to put together, something that involved a part of history that had been so well trodden it had become clichéd. The Pied Piper of Hamelin was just that. It was a tale passed from tongue to tongue, old to young and century to century. It was a warning! If it had not been for his dream, he would never have even considered venturing into such territory.

The dream, for that is what he hoped it had been, was still resonating in his mind. To contemplate any other explanation for it would have been to invite madness into his life. The memory of his dead son’s voice, coming through the static, warning yet pleading for his assistance. Dream or not, the plea had touched some paternal cord that could never be severed. He had failed his son through the break-up of his marriage, through his myopic adherence to his teaching and through not being there when he was most needed. The gaps that are left when a marriage is torn apart can be big enough for people to fall through.

He rubbed his temple, feeling the first pinches of the headache that had become a regular visitor in his nocturnal travels. One of his colleagues had suggested that too much time spent in front to the computer screen would cause that. He knew that it could, but also understood that the pain that was now building was more than that. It was a warning. By the time he had finished, in the early hours of the morning, his head would feel like it had been hit by an axe.

The ache he felt at the beginning would grow and develop until it would become excruciating. It was as if something sharp was being inserted into his brain and was probing his mind. Nevertheless he had a job to do, a religious duty, a penitence and the pain was part of it. He perused his notes.

The legend of a mysterious piper is not, as many believe, confined to Germany. It just so happens that Hamelin had a good publicity machine that perpetuated the tale and stamped it with their trademark. What is accepted is that in 1284 a mysterious rat catcher turned up at the gates of the city with an answer to their immediate problem. He would, he assured them, rid the city of the rapidly growing rat population if they would agree to reward him with a king’s ransom. The scale of the problem was such that his proposition was instantly appealing so he was sent to work. True to his word, the rat catcher enticed the vermin from their lairs and brought them to the river where they all, every last one, drowned in its waters. Job completed, he returned to collect his dues but was to be disappointed by the burghers’ response. Now rat-free, their contract appeared to be much too generous. He was only a rat-catcher after all, what harm could he now do them?

The rest, as many would say, is history. The history teacher disagreed, knowing what constituted real history and what was merely folklore.

Some of the many anachronisms that surround the story have made for a multitude of explanations which have more in common with creative writing than actual hard historical investigation. It is therefore essential to admit the absence of facts, or at least ones that can be relied upon. Only theories existed.

Theory 1: The Pied Piper is a plague-related story. Incorrect. The Black Death did not reach the shores of Europe until at least a century later.

Theory 2: The Pied Piper is a Crusades-related tale. Partially correct. Many scholars have drawn similarities between the Children’s Crusade and the story. Again, though, there is some disparity between dates.

Theory 3: The children were led into a mountain cave and never seen again. Folklore. Even in this folklore, there is room for a little more interpretation with stories of children being led through a host of underground caverns before emerging in the forests of Transylvania. And settling there. This tale links into various vampire myths.

Theory 4: Hamelin was the only city to be affected by such an event. Completely incorrect. Many cities in many countries have stories that share common threads or are almost carbon copies of the German story.

Theory 5: The story was a post-trauma narrative constructed to come to terms with an event of such horrific magnitude that no other means of recording it was possible. What is accepted is that something certainly did happen and not just in Hamelin.

There exist some trusted reports of a stained-glass window depicting the events, but that went missing in 1660 when it was replaced. There does exist a reconstruction of the of the image with an accompanying rhyme that tells of one hundred and thirty children being led away for eternity by a brightly dressed Rattenfänger. The original window was said to date back to before 1300 which adds weight to the theory as having a definite basis in fact. When the rest of the Piper reports are added to this, there appears to be an overwhelming case for such a being to have existed. What’s more intriguing is the way in which this person appears throughout history and how similar tales have been told in many different cultures. The thing that connects them all is a man with a flute or a pipe and the instrument itself had the power to persuade almost all creatures to follow its tune.

He looked at his notes once more in an attempt to interpret what they were telling him. His dream had warned him of The Piper. His quest had consistently thrown up references to this nebulous entity.

Could it possibly be?