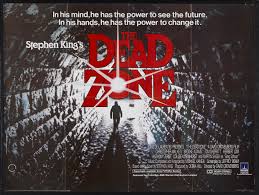 I read this book in my late teens or early twenties. It struck me then as something to think about and now it strikes me as prophetic., a successful businessman and delusional egomaniac, becomes a contender for president and would have convinced the blue-collar workers, rednecks and those left out of the American dream, to put him in the Whitehouse. King, being King, made a ludicrously sounding plot believable and now America, in homage to one of its greatest commercial writers, has made the dream come true. The world is going mad and soon Trump will be conducting the cacophonous calamity that will play out on the world stage.

I am scared to death of the lunatic. I am scared of those who see his illiberal-evil and believe it. I am scared that what King’s character dreamt about will actually happen. Give me vampires or zombies. Give me a super plague or virus. Give me anything but Trump (and that is not an order). The inauguration hasn’t taken place just yet but soon it will be history. How much are betting companies’ odds on Trump being trumped before he truly takes office? Will a lone gunman try to JF DT?  Alas, there will be nothing that shakes Trump’s immoveable belief and manifest destiny. Only in books do the villains falter at the last; in the real world they continue apace, get their nasty business done and then fade into a distant memory of a one-time terrible illness.

And so, it has come to pass that the epitome of ignorant evil has survived his first year; almost. Indeed, his stance had become emboldened by the persistent sycophants and fawners who are now anxiously waiting in the queue to shake the hand of America’s best. It makes me sick, sick to the very core of my being that “the will of the people” can be so wrong. And yet isn’t it that this very will is what our newly promoted populist politicians would have us believe is in the same ball-park as the first commandment that Moses inscribed on his tablet? Thou shalt not ignore the will of the people.

As a person, I would gladly ignore the slavishly ignorant will of a people who have entered into the wilderness under the guidance of a snake-oil salesman and shaman. They believe that they speak the truth because they dare to say what others nowadays find repulsive. They like to call a spade a spade, a Jew a Jew, a liberal-minded woman a whore or a dyke and a gay an abomination. The truth is to be found in the core of their excremental souls, the way of seeing past evolution, empowerment and even-mindedness. Empathy left the harbour a long time ago and has now been scuttled in the mid-Atlantic.

It is a central irony that in seeking to combat extremism, Islamic in particular, the most powerful democratic nation on earth should elect an equally barbarous ignoramus who seeks to exercise power in the same manner a lynch mob would dispense Frontier-Justice.

And there it is folks, the reason for education. The central motivating factor for me to become educated and to attempt to lead others in that voyage of discovery was to rebalance the sides. I wanted to help put more decent thinkers into the world in order to combat the inevitable rise of the ignorant who often feign their own disappearance in order to spring back again when least expected. It’s like an overused cliche from a cheap horror-flick; the keep coming back.

2 thoughts on “When Truth Becomes Fiction”