Nobody knew that Pete could tell the time and only Nick knew that he had a special gift.

Pete could read the thoughts that other people had.

The big clock on the playroom wall told him that his mother was late. She always arrived and picked him up at ten minutes past five, give or take five minutes. Now the big clock’s hands were pointing to eleven and six. He knew that that meant that she was very late.

Pete watched as the other children were picked up by their parents, mostly mums. He had confided in one girl, Amy who was almost a year older than himself, that he didn’t have a dad. She nodded and said that she didn’t have one either or rather that she did, but he had moved away to live with another family.

She said this as a matter of fact, but Pete knew that she had been struck by something that really hurt. He knew that she cried herself to sleep when her mother switched off her bedroom light.

Twenty minutes ago, Amy’s mum had turned up with her face of survival and had taken her home.

“Oh, so this is the Pete you’re always talking about?”

Amy had blushed with a childish mixture of pride and embarrassment. Pete was supposed to remain a secret crush and now her mother had blurted it out as if it was something that was funny.

“Your mummy’s late isn’t she? Has she been held up in traffic or something?”

Pete shrugged his shoulders suggesting that he obviously didn’t know. Inside, he knew where she was and how she was trying to make her way back to him.

More important for Pete now was the fact that the big hand was moving towards six o’clock and that was the time the nursery closed. There were very expensive fees for leaving children beyond this time, but Pete knew that fees were not part of anyone’s concern. The big lady with the lovely smile was his immediate problem.

Pete stopped pushing around the Thomas the Tank Engine contingent he had managed to assemble. He’d achieved a minor coup since he had never been able to collect all of them together at exactly the same time. He had Thomas there with his blue livery, Edward and Gordon who shared the same colour, Henry who was green and James, his favourite, who was a stunning red. The toys were old now and had been handled by hundreds of children with care and without care. Tonight, he had aligned them all along the railway track of his imaginary Westward Way Railway Line.

James came to a halt. Mathew, the last of the other children, had been picked up by his mother.

“Do you mind if I get off, I’ve got some shopping to do?” Katy, the nice nursery nurse asked the big lady.

The big lady liked to be called Samantha, but Pete knew that this wasn’t her real name.

She gave him that long practised smile. Pete smiled back , not wanting to let her know that he knew how long she had practised that smile.

Katy grabbed her coat and her bag and was out of the door with a friendly goodnight. The big lady smiled again, waited a few minutes and got to her feet. She crossed the area between her seat and the door and locked it. She turned off the lights. Pete felt, without having to see, the smile disappear.

“Now then, Peter, I know someone who is dying to meet you. You will have to put your coat on now as he doesn’t enjoy being kept waiting.”

Pete didn’t move, his mind was delving hers.

She was somewhere else now. She was not in the same room as him but was amongst lots of other children wrapped in white sheets and sleeping in depthless dreams. She was walking along the spaces between the beds. She was making her way towards one bed in particular and when she got there she would pull back the sheet to reveal… himself sleeping.

“Move yourself now, you little shit before I do something about it.”

She moved towards him with menace and then stopped as she heard a knock on the door. Her face contorted a little, she was unsure of what to do. Pete sensed that she could ignore the interruption. Her mind was reasoning that anybody outside would assume that there was nobody within. The lights were out after all. The knock came again and the voice of Katy rang out,

“Samantha, you still there? Samantha, I’ve got the wrong bag.”

The knock was more urgent and Pete slipped inside the hesitation of the big lady and pushed. He pushed her towards making a decision that would help him. She thought to herself once more and this time she decided to answer the door. Pete seized hold of Edward and waited.

The door was opened in the same way it would be opened to unwanted salesmen.

“I was just putting our coats on. His mother called and asked me if I’d take him home. Her car’s broken down.”

“Can I come in then and get my bag? I must have picked up yours by mistake.”

Grudgingly the big lady opened the door just enough to let Katy in. Katy had to literally squeeze through the gap. Pete waited in silence.

“I best give Pete his coat if you’re leaving. We can all leave at the same time can’t we?”

Katy passed Pete his coat and he put it on without revealing what he held in his right hand. The smile was battling to remain together when Katy spilt the contents of the other handbag on the floor by mistake.

A six-inch switchblade fell open on the floor and transfixed everyone.

The big lady made towards it and Pete ran for the door. She turned to stop him and almost caught hold of his coat sleeve. The smile quickly became a savage grimace of intent and he wasted no time in launching Edward in the direction of her left temple. The smack was audible, even above the cry of astonishment coming from Katy.

Pete was out of the door and into the night. 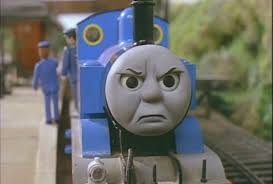 He laughed about how Edward had got his own back on the Fat Controller and was away.