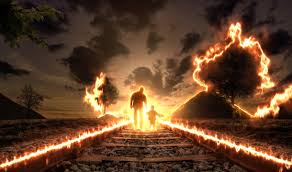 Everything that The Piper had promised was beginning to come true.

Okay, that Andrews kid was still on the run and they had missed the bloke he had sent Podrall to capture, but everything else seemed to be going great. The city was alive with mayhem. Gangs were rising up and taking control. The new world was close at hand. Liam felt the air of the autumn evening and tasted its promise. He would be a king amongst men, but for now he was just learning the ropes.

Podrall was a fool and he was happy for that. Podrall would do anything that he bade him do and there would be no questions. The boy was a follower who aspired to be a lieutenant, a follower of orders, a carrier-out of commands. He and the others would be very useful when he needed them.

“What do you want me to do?” he muttered to himself, but there was no reply from the corpse.

Its motionless state merely emphasised his indecision. He needed the old man to help him. He needed him to light the way. He needed instruction. Liam had raised the first of his armies and had infiltrated the school. His boys had won over the lost and the lonely; they had convinced the empty and the evangelical that his was the way to follow. In a world without hope, Liam’s promise shone out.

“You will have what you want, and more. It will be your world again as it should have been. The old have corrupted all that they have touched with their false prophets, but he has returned again to dim their lights. The night is ours and through that we shall rule the world.”

The offering had been spoken in the currents of dreams and had washed over the minds of those who cared nothing for that which was around them. One by one, they came to seek out the owner of the words, first through Podrall and his gang, then through a pilgrimage to the door of Flowers. Nobody had seen or suspected until it was too late. Everything was in place. All he needed was a sign to tell him what to do.

The night had long since begun its reign and the darkness was upon them as Liam watched the world from his window.

The rain was falling in unison with temperature and those people, who had better places to be, were rushing to the safety and warmth of their homes. Car headlights occasionally lit up the main roads as they ferried their occupants back to their hollow lives. Then he heard it. It had been what he had been waiting for, a gigantic explosion that lit the sky with a million crackles of mischief. Somebody had sent an air-bomb racing into the night and into the razor-edged nerves of all those who feared the perpetrators of such deeds.

Liam smiled as his answer revealed itself to him and, in the dimness of the of the flat’s interior, a slight grin tore itself across the features of the Leatherman.

Later that evening, Podrall came around. Liam answered the door and was a little surprised that Podrall was on his own.

“They’re at the bottom of the stairs. They didn’t know if you wanted them.”

“Good thinking. I don’t. You alright?”

Podrall did as he was told, but still felt a bout of nausea when the door opened wider. He didn’t know how Flowers could stand it in there with that corpse for company. He knew it had been there for some years and he also knew that it didn’t give off much of a smell, if any, but his instincts told him otherwise.

What Podrall could smell was a memory. He knew what death smelt like because he still remembered the smell that greeted him and his mother that summer when they had gone to spend a week in Blackpool. In his rush to go on the unexpected seaside trip, he had partly forgotten about the guinea pig that he had promised to look after.

It had been the class pet and Podrall had been surprised that he had been given the responsibility of caring for it during the long summer break. Indeed, his teacher had made a point of giving it to him as she said it would be good for him to learn to care for something other than himself. The fact was, Podrall often took care of his mother, and the shopping when she got into one of her states.

Even though he knew that his mother would not appreciate having a smelly little rat around the house for six weeks, he thought that he could keep it quiet from her. She never came into his bedroom, so he decided that the wardrobe would be a good enough place to hide his new guest.

Not long into the first week, she returned one night with a new bloke.

“This is Tommy,” she had announced. “And if you’re good, he’ll take us both to Blackpool for the weekend.”

She then disappeared with her new beau into her bedroom and the noise the two made kept him awake until the early hours of the next morning.

Podrall thought that whatever went on, must have been good, because the next morning she was up and packing with the radio accompanying her new mood. Tommy was sitting in the armchair rolling himself a joint.

“This your kid then?” he said, turning slightly towards the child coming out of the bedroom.

“Yes, that’s our Joel. Say hello, Joel. Tommy’s going to take us away to the seaside for a few days.”

“Oh Jesus, not the bloody kid as well.”

“Well it’s both of us or none of us,” his mother had stated.

She must have been good because Tommy just shrugged, “All right then, but I’ll be wanting extras.”

With this, they both exchanged a wink and a giggle believing that the child was too young to understand what they had been talking about. Podrall understood every word and nuance, but this went no way to taming his excitement. A holiday for the first time in his life!

It was only when he was sticking another coin into one of the countless fruit machines, lining the promenade, that he remembered the guinea pig.

He told himself that it would be fine, that guinea pigs would often have to go without food and water when they were in the wild. And that he had left enough food and water for the short time that they would be gone.  However, Tommy and his mum were obviously getting along great guns as they decided to extend their little stay for another few days.

When they got back home, Tommy and his mum collapsed into bed with the smell of those cigarettes sweeping the house.

Podrall could smell something else and behind the wardrobe door was the glasy eyed welcome home gift. The heat of the days had turned the little sanctuary into an oven which at first suffocated, then cooked its helpless prisoner. Luckily, his mum and Tommy would be busy, or asleep for at least a couple of hours which gave him the time to get rid of the corpse and the offending smell.

Unfortunately, the sweetness and rancour of that tiny death never left Podrall and he found that his subsequent dreams were to be filled with the sweet scent of guilt and denial.

Now, as he entered the flat, he got the same smell and the same guilt.

For a moment Podrall was dumbstruck. Flowers never made small talk these days.

“I’ve always loved fireworks. The Chinese used them as weapons. That’s where we got them from.”

Podrall felt like saying that everything seemed to come from China these days, but kept his tongue.

“Yes, the Chinese would use them like rocket launchers and would attack their enemies. Then, in celebration, they would send decorative fireworks into the night sky to display their message of victory.”

Flowers turned with that smirk again.

“That’s what they did when they caught Guy Fawkes. They hung him, stretched him, cut his intestines out for him to see, then, finally they cut off his arms, his legs and his head. We celebrate this with bonfires and fireworks as a way of warning those who would oppose us to cower instead.”

He paused for effect.

Podrall was not quite sure where this was leading, yet knew when to be silent. His gaze kept drifting towards the Leatherman in the armchair and he had a strange suspicion that the Leatherman’s dead, empty eye sockets were watching him too.

“Did you see that thing on the news?”

“You know, that thing about the religious gits who blew themselves up on the tube. It was funny. One minute there, sitting quietly and the next, ka-BOOM! It was like trying to find jigsaw pieces.”

Podrall had heard of this and had been confused. He had always hated foreigners and had felt that they should be punished for this. In fact, he and some of his mates had made some of the Muslims pay for it already, but what had this to do with them?

“You’re wondering what this has to do with the price of cheese aren’t you?”

Podrall shrugged his shoulders and painted a dumb look on his face.

“I liked what they did. It was good. It was weapons and fireworks all at once. The only thing they did wrong was to go and blow themselves up. That way they can’t do any more harm. Stupid.”

And Flowers did think it was stupid to sacrifice yourself, to become a martyr. What kind of god would demand such obedience? Nevertheless, he liked these guys and wished that, if the time came, some of his followers would do likewise.

“I want you to get me some fireworks.”

Podrall was slightly relieved by such a tiny request. He thought of the newsagents where there was a stack of powerful rockets, bangers and air-bombs. It would be easy nicking some from there.

“What type do you want?”

And that was when Flowers darkened.

“I want all types. I want as many as you can find or steal. I want petrol and gas. I want anything and everything that will make the biggest display anyone has seen around here. He wants to light up the sky with our audacity. He wants people to know the name of fear and to see it written across the darkest horizons. We shall make a bonfire to remember.”

Another explosion lit the night and the face of the Leatherman smiled broadly.