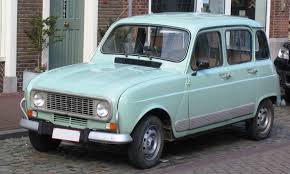 The photograph is like my memory, rather vague and unfocused. At some point my first car let me down. It may have been something and nothing but, as I was enjoying a relatively good wage, I thought I would treat myself to this little number.

I called her Claudette. She was straightforward, confusing, quirky and not too fast on the uptake. She was a strange choice yet she had something about her that made me smile.

It was said that the car was unencumbered by an excess of power. The simple act of putting the pedal to the mettle resulted in little more than a gentle increase in velocity. Yet fondness for the car runs deep amongst the millions of drivers who have ever owned it. First introduced in 1961, it became a favourite in over a hundred countries. Along the way, it became one of the most popular French cars of all time and one of the bestselling vehicles of all time. All in all, over eight million models were sold, and it was produced in 28 different countries. It was the type of car that I would have imagined Inspector Clouseau to have driven. I followed in his tyre steps.

The 4L (Quatrelle) was a ubiquitous vehicle that was practical and easy to maintain. The boss of Renault, Pierre Dreyfus (another coincidence) demands that his company was to produce a vehicle that would match the classless appeal of blue jeans. It was such a car and it appealed to motorists of all ages. Although I was a serving police officer with the Metropolitan Police, I found some solace in owning and driving such a car of the people. It pulled me away from the fact that I was serving in a sector of public control which was well known for its institutionalised racism and right-wing beliefs. My Quatrelle was literally my way out, if a little tardy one.

Working together, my little French car and I were able to fix the problems of failing windscreen wipers. Well, I have another friend to thank for that as it was he who discovered that tearing out pages of my police instruction manual and pushing them into the space behind the cigarette ash tray would put enough pressure on the mechanism that drove the swish, swash of the blades for them to work effectively. I always found this good for seeing other road-users in times of heavy downpour.

The Quatrelle was basic in other ways, with metal deckchairs strung with plastic hammocks to provide comfort in travel.  She had a personality that responded to soothing words and encouragement. In the midst of winter, when her starter motor could not turn, somehow stroking and petting brought her round. She would cough into being and her Wankel engine would turn.  She would splutter and complain on the cold mornings, but she would always come through. If she ever broke down, she was light enough to push into a siding until she responded to the reassurance of my commitment to her wellbeing. And let’s not forget the gearstick that was so oddly placed in the dashboard. It was certainly a talking point.

For a while, we had discovered a mutual path that we drove along. It was a path of contentment, one that required no yearning for any other form of transport. Nothing could turn my head; she was perfect.

I don’t know when it started to go wrong. But I do know where.

We were on the dreaded M1 Motorway again. She was not built for such aggressive roads. When placed next to the faster, meaner cars, she blushed and retired into a resigned acceptance of her lot. She couldn’t go fast. At sixty, she was all out. She began to rattle, splutter and shake. The bullyboy lorry drivers teased her with their imposing size and undeniable strength. On many occasions we would find ourselves stuck between two of the big beasts without any hope of escaping their dastardly pincer strategies. I can see their faces now, leering at us from on high and I can hear the panicked whine of the Quatrelle’s engine trying to build up enough speed to get us out of there.

What I wanted from Claudette, she could no longer give. I was becoming a man whilst she remained as a sweet blue-jean car. My urgings of greater speed had taken their toll on my little French lady. She had done her best to serve me well, but I had asked too much, too quickly.

The years since have wiped away the details of our separation. Perhaps it was when her wiper blades finally succumbed to the strain of swishing and swashing. Perhaps it was that her tiny little engine finally gave out. Or perhaps it was me, yearning for something better, flashier, faster. I was, after all, a young man who was growing up. My appetites had also grown, so I eventually reached the decision to sell her.

She sat there on the forecourt of a small car-dealer’s as I pocketed my fifty-five pounds and I did not have the strength to say goodbye. For all that I know, she is sitting there still, the pages of my police instruction book now many years mouldy and the seats, those deckchairs without purpose. And, dare I say, her misguided loyalty rusting where she stands.

If only I could turn back time. But I alone could not change the course of history. 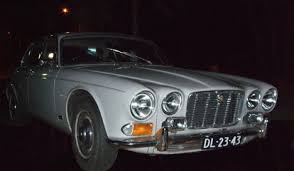 Something rather more adventurous was waiting in the shadows.