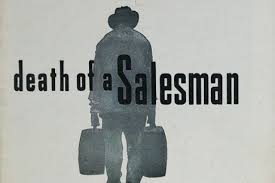 It seems strange that I should get so far into (and out of) a teaching career without having read this play.

To be fair, although I started off teaching A Level, a lot of what I have done since is the bread and butter stuff of secondary qualifications. The tall and the short of it was that I landed a role in a college of further education to teach A Level Literature. If had hadn’t been so worn down by recent events, I would have cheered. Life has had its way with me and turned the eternal optimist into a stoic.

To cap it all, the position was very last minute which meant that I had to either cut ties or burn bridges with the agencies of my enslavement. I chose to burn bridges.

I was taken with Willy Loman’s portrayal of the tragic hero; an ordinary man, with dreams that are too extraordinary, brought low by the weight of them.

I read about his downfall. I read about Miller’s thoughts on classical tragedy. I thought about my own role in this. More than that, I considered the fact that a tragic hero is one, regardless of status or rank, who has a dream and pursues it in spite of the impediments that stand in his way and unconcerned about the unsustainable nature of that dream.

The true tragic hero goes to his grave convinced of his right to have that dream.

And I was drawn to the possibility of some unseen hand writing my lines.