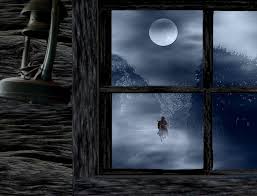 Beyond his window was winter. It had finally arrived.

A long-awaited smile cracked beneath the surface of his leathered skin. He inhaled the cold air that had perpetrated beyond the pane of glass…at Last.

“So, you have returned to me.”

The empty world gave no response.

He watched the frozen landscape, and the moon, impaled on the highest peak. This was how it was meant to be.

He knew that he couldn’t be dreaming because he never dreamt. He was pleased that he did not wander in the nocturnal world of flotsam. He had never read a newspaper nor had he read a book. If he ever allowed the truth to be told, he would have admitted to not being able to read. It was a skill that was beyond him and one that he really didn’t need. A book was paper and it could be…

7 thoughts on “For Dark Winter Nights 2”