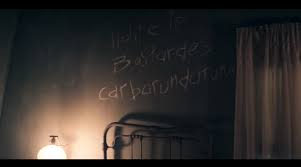 Whatever we believe, it doesn’t have to make sense. Not even to ourselves.

Some of us get to certain ages or stages in our lives when things to believe in run out. Gods and Santas have gone the way of the dodo; the fittest only survive and there is no room for sympathy. If we have reached those ages/stages, we have probably deciced that we are of the weaker mould, our maps and philosophies have been blown away; the world is run by the strong for the strong and we are that other group, the ones left in the breakdown lane.

So the phrase above, which isn’t in Latin nor any other language, is a good one to believe in. It can act as a mantra (as it did In Handmaid’s Tale) or it can act as a defensive threat (as it did when used by  Arthur Seaton in Saturday Night and Sunday Morning) or it can act as quiet reassurance for all of us who struggle with the constant grind of this thing we call life.

Strangely, I find it has some aspect of optimism about it. It’s a message from one person to another, a shared commentary on a journey, a secret spell that wards off the dark. The Bastards are out there and grinding is their weapon of choice, but they don’t know what we know.

It’s not the sexual act that has become the reason for people meeting on the internet, but it can f**k you up. This ‘grinding’ is about loading you up or weighing you down. It’s about seeing how much you can take before you can take no more; before you break. It is the straw that is placed on the donkey. It is that last thing that an indifferent boss, uncaring system, or even a cruel universe, wishes to put upon you just to see  the comic outcome.   At least somebody gets to smile.

People who know me may now be thinking that I am going through another bad time. I am not.

I am ruminating. I am cogitating. I am stretching out into myself and touching the implications of what it means to be me and to be you. And what it might mean to be somebody who sees the end of the process, the welcome onset of twilight in which a low sun shines without a care about whose halo it is touching. It’s the time before sleep when memories of the day that has passed move like mist through the minutes leading up to the onset of dreams. A feeling of warm repose and a welcoming of sleep (human and not forever). I have gone all Robert Frost again.

And now to help my wife with the washing up. And then the lunchtime preparations. And then to see our daughter home for a quick visit from university. And then…
Grind all you will, I am too busy to think about you!