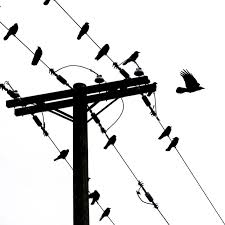 Michael had been navigating using the road map they always carried in the boot of the car. Occasionally, ‘the mother’ would shout out contradictory directions and always, Michael followed hers. They were getting closer and the closer they got, the heavier their forebodings became. They had not seen any signs of the leathers for some miles but had seen some huge gatherings of crows and ravens. They blotted in the air, a warning of something past or yet to come.

When they reached a small T junction, Mother and son were amazed to see the fresh tyre tracks lining the surface. A sign told them that the village of  Hepley was just one and a half miles away whilst the one pointing to the right indicated that Ravenshead was another ten.

“I have a feeling,” Laura said, “I have the strangest feeling that the people who were in that car are now in danger.”

Laura followed her son’s finger and saw a huge swarm of large black birds circling and falling to the earth. They had found something. Laura swung Brian’s wheel to the right knowing that it could be a costly mistake.

They travelled on for maybe a mile and then found the place where the car had left the road, Manic skid marks led to the gaping wound in a wall. Some of the stones were marked with paint that had been scraped off and the ground showed evidence of the crash with shards of glass, body trimming and part of a bumper testimony to the event. Brian was eased to a halt.

“Looks like they crashed through there. By the size of the tracks, it was a big vehicle,” surmised Michael.

Laura nodded without saying anything. She was more interested in the other tracks that emerged from the stand of trees to her left and disappeared through the gap in the wall. She counted about twelve pairs, but she could not be sure. There was a muttered, “No,” from ‘the mother’.

“Have you seen the footprints Michael?”

Michael had just noticed them and recognised what they were.

“Looks like our friends ran into some of the leathers. Be careful.”

Michael did not need to be told to be careful as he was already out of the car, walking over towards where the strangers vehicle had smashed through the wall. When he got there, he peered down the sharp slope, through the trees where a path had been bulldozed by the vehicle that was lying jammed between the banks of a stream whose waters were rushing in through the open doors and above the level of the seats. From here, he could see that the driver’s seat was empty, the door flung open, hanging askew from only one hinge.

“There’s a car down there but there doesn’t seem to be anybody in it. I’m going to check. Mum, keep a look out for anything suspicious.”

For Laura, it was all suspicious but she knew what he meant. She climbed out of the car leaving the keys engaged in the ignition. There was no sound coming from the nearby trees, no birdsong or anything, and this was more unnerving than the obvious signs of leathers, for Laura could see numerous rooks and crows sitting on the branches of the trees from which the things must have emerged.

Michael descended the slope quickly using broken trunks and branches for support. He slipped couple of times but was able to correct this with the aid of the surrounding foliage. When he reached the banks of the stream that was flowing at a furious rate, he understood fully what had occurred. He stepped in the icy flow and stepped carefully towards the open driver’s door. Once there, he noticed the marks left behind by a copious outpouring of blood. With this amount of blood loss, he could not imagine anybody surviving for long, especially not in these conditions.

The passenger door to the front and rear were hanging open too. Scattered on the back seats were sleeping bags, rucksacks and food. Whoever was in this vehicle left in a hurry, leaving behind all those things that were essential for short-term survival. Michael was sure that at least one of the travellers had not survived the initial accident whist the others, well anything might have happened to them.

“Michael,” it was his mother calling from above, “are you alright down there? Have you found anyone?”

Michael did not like it either. Touching the car had been like touching a freshly dug grave. He started back up the slope, this time using the branches even more to aid his ascent.

“Let’s get going,” he said when he was back in the car. “Turn the car around and head back the way we came. I think some of them have already arrived and they’ve started the job a little earlier than planned. Laura drove on a little way to a wider stretch of the road and did a 180 degree turn. As they drove slowly past the scene of the accident, Laura internalised a prayer for the people who had been in the car.

They moved with a little more speed than was wise. Anyway, there were definite signs of a thaw arriving. Run-off water was growing in volume and beginning to wash away some of the snow. There was a suggestion of sunshine from the east that brought some relief to their artic states.

‘The mother’ was mumbling again, speaking words and half words that nobody understood. Regardless of the words being so foreign to the ears of Michael and his mother, her children seemed to understand what she was saying. They, Rachel and Joshua, were holding her as she mumbled in something that was not English.

“She wants you to stop the car,” translated Rachel. “She says there are some people in great danger.”

Laura eased back on the accelerator and changed gears rather than braking. Brian pulled safely to a stop. Everything was still. Then some more mumblings.

“She says they are coming over the hill,” added Rachel pointing to a slope on their right.

Their heads swung around and surveyed the pristine covering of snow seconds before a head, caught the morning sun, showed itself.

No double-take was necessary as Michael and Laura sprang from Brian’s warm interior. Michael was quickly over the roadside wall and striding up the hill. His mother was behind him, unable to keep up, yet still scouring the hilltop for signs of leathers. She was not to be disappointed. Some forty yards behind the first figure was a pack of leathers moving in the relentless manner, loping strides eating up the ground, that they were to become accustomed to.

“Michael, there are leathers. Take care.”

This was the second time she had urged caution and he was not about to ignore it. He looked up the hillside and noted that the first figure stumbling down the hill was carrying something, a bundle wrapped up in their arms. It was obviously heavy because the strain of it was evident even from this distance. Then the figure tripped, fell face forward and dropped the bundle so that it skidded in front of them, sliding along the snow on its own.

The Leathers proceeded without breaking stride, their progress cutting the space between them and their prey. Michael broke into a sprint that surprised him. He reached the bundle just before the figure had raised itself to its feet. The tiniest cry escaped the bundle, a cry that could only belong to a baby or small child. He knelt and picked it up only to have it knocked from his grasp by the person who had been carrying it. The bundle fell on the soft snow once more and Michael had the air punched out of him. He went down as if hit by a train.

The impact must have been forceful as it also took the breath away from the assailant as well. Valuable seconds rolled by with Michael and his attacker on the ground. For the first time, Michael was able to see firmly into the eyes of the other and he saw naked fear.

Gasping for breath, the other nodded as best he could. Michael thought he seemed on the edge of collapse.

The footsteps were almost upon them as they raised themselves to their feet and then into a semblance of a run. Laura had reached them and was able to offer support to the person who had been carrying the child.

When they eventually reached the safety of Brian, they pushed the fugitive into the back, a space rapidly created by the mother and her children. Michael sat in the front with the baby and Laura pressed down firmly on the accelerator. As they pulled away, Michael noticed that the group of leathers were having some trouble surmounting the wall.