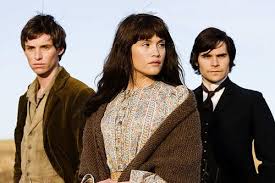 Just something I did with A Level Literature students to help them get a grasp of the narrative.

The Story of Tess.

This is the story of a young girl who should have been content with the lot that was given to her in life. She was born into a family that had descended from aristocracy but now they were poor. Although Tess was a little aloof, always trying to act ‘proper’ in accordance with her Christian upbringing, she sort of belonged; sort of.

Some said it was the unwise and interrupting Parson who started it all. He thought it to be amusing that he should tell Tess’s father, who liked a drop of ale, that he was descended from a very famous knight who arrived in England with William the Conqueror. He told him that it was of no use because the family was now extinct.

Too much ale does not help to get the bees to market in the morning. So, with Darbyfield and his wife too drunk to drive, the ever willing Tess said that she would conduct the cart to market. But she really did live on a blighted star, as an accident with the mail carriage was to prove. One dead horse later (Prince to be exact) and the family was penniless. And it was all Tess’ fault.

To make amends, she was packed off to the nearest, newest, and richest relatives, the d’Urbervilles. The truth was that they were really only Stokes and not in any way related to the illustrious name. Nevertheless, who was to know? And who cared? A devil called Alec cared. The real question was, how was a girl to ward off the unwanted sexual advances of such a demon? The answer was that she couldn’t. The sheep’s clothing could not hide the beast beneath and somewhere in a forest Tess met the wolf and it gobbled her all up.

In that world, an unmarried mother was a ‘fallen woman’ who had to endure the sin of Eve upon her. She brought shame to herself and to her family. Even the neighbours felt uncomfortable. So now, worth nothing, she was an embarrassment to everyone, her baby was to be a bastard and the curse that she would have to bear, even after its death.

When a woman is in need of angel, an angel can descend to a dairy nearby and lift the lady from her sorrows and into the land of milk and honey. Tolbothay’s Dairy had become a haven for female seasonal milkers and a certain Angel Clare had become a popular attraction. Not surprisingly, Angel fell for Tess and she for him. At this point he was unaware of her sexual history so elevated her to godlike status. As a result, they fell in love, got married and lived happily ever after; NOT!

Never tell him the truth, her mother had told her. What do mothers know? It turned out that they know an awful lot. Angel left her for a holiday in Brazil and Tess went from one hardship to another. She blamed Angel for all her suffering and she was right. Angel had been a pious little prig. Then the devil appeared to her. And, like the bad penny that he was, he offered to spend those coins on the upkeep of her poor family. She knew the devil for what he was but felt obliged to sacrifice herself one more time for the benefit of others. She became his ‘creature’ and was kept as such.

When the jungle doesn’t turn out the way that it was advertised in the brochure, a wise man returns home to the warmth and care of his family and his estranged wife, who no longer seemed as fallen as she did before.  So returned the prodigal Angel, husband and son to boot. Just what did he expect? Bunting and a fanfare? A woman scorned is a woman to be avoided but our little Angel thought that the sight of his sickly, love-racked soul would instantly turn the girl back towards him. When she was now going through a hell of others making she could not simply kiss and make up.

Cue quick turnaround. Cue violence, misuse of breadknife and a successful extrication from a life as a sex-slave. Cue escape scene with reunion of old love. Cue final consummation of marriage and cue doomed attempt at happiness. What more does a reader want from a tragedy; a happy ending?

A quick visit to Stonehenge. A fitful night’s sleep on an ancient stone, and a somewhat sympathetic arrest by members of the local constabulary. All quickly followed by an unseen execution. Oh, and a convenient promise for Angel to hook up with Liza-Lu, Tess’s oddly named younger sister, and hey presto, the job’s a good un.

Justice was done and the President of the Immortals stopped messing with her life.

Just what did a girl have to do to get some ordinary loving around there?