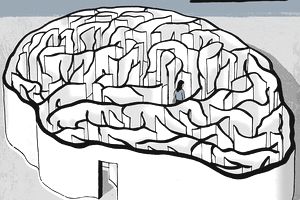 I woke up last night to let the cat out. She sleeps until around 3 or 4 and then pads around the bed until one of us gets up and lets her out. I was awake anyway.

At that time of night, the world around is still. There is a subdued acquiescence to the conventions of the hour. Any noise made is made for all to hear and for many to suspect. My movements prompted only a grateful meow from the moggy as she strode off into darkness.

But, as I was saying before context burst in, I was awake because of one of those half-formed dreams; a revelation.

When I awoke I was not the man who had previously fallen into sleep. That other man was the one who had been sharing my journey for three decades. That other one was the person who still held onto the past as if the past would come magically alive again with the waving of a wand. No, this one who awoke was somebody different. This one who opened his eyes before the cat, saw in himself that he had changed.

After letting the cat out of the back door, he climbed back into bed alongside his sleeping wife. She was having strange dreams but didn’t mutter them. He lay there next to her slight snooze and wondered about his dream, his revelation. Sometimes the night can confuse. At times the border between the real and the unreal becomes vague and it is only the clear light of day that separates it.

This morning I woke up and the new me was sitting there. The old one had gone out with the cat and did not return.