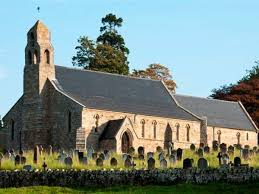 The Archdeacon is an ass, the graffiti announced.

It had been waiting there for almost eight hundred years to make this proclamation and now it was out. Whoever had decided to dig up this part of the old graveyard had uncovered an ancient indictment. Whatever the Archdeacon had done to deserve such an epitaph few people would ever know. Beside the Archdeacon being a backside there were other things of interest in the vicinity of graveyard.

Few people knew of the plague pit that had been dug and filled with almost the entirety of the village’s early population. It nestled within a slight rise some yards to the right of the church walls. Hardly anybody had noticed this mound although a number of others had quite easily been able to see the definite inclination of the church steeple as it leant Pisa-like towards it.

Money was in the process of being raised for building work to begin in order to right the wrong of subsidence. To visitors, the sight of unsightly scaffolding tainted their appreciation of St. Michael and All Angels, a truly historical place of interest.

“Yes. Lucifer was the only angel that was thrown out of heaven. It was Michael who fought him; sort of God’s enforcer. Lucifer wanted to remind the big G that he was still to be reckoned with and God agreed so he ‘smited’ old Lucifer. I think that was the word, he ‘smited’ each church that was called St. Michael’s. This one he did with the visitation of a great storm that brought winds and rain, the like of which have never been seen since.”

“Is that true? Has that been written down?”

“Not written, oral history, as good as.”

“As good as writing.”

They were tourists. Three men who had entered into the category of old sometime before. None of them admitted to each other that they felt old but on some mornings, when they dragged their weary bones out of bed, they felt old. Like bodies from the tomb.

The truth was that life was closing down all around them. Friends were dying whilst others just collapsed into solitary subsistence, not leaving the house for anything other than supplies. Some had wives to look after and some were in the process of being looked after. What it amounted to was just those three; three not so wise men who had lost any sense of a plot beyond the daily script of getting from dawn until dusk.

They visited places on their Thursday outings; each taking the turn at the wheel and each choosing the destination.