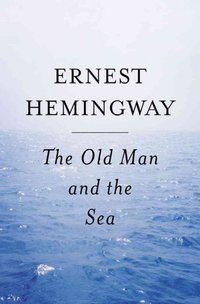 He was an old man who fished alone in a skiff in the Gulf Stream and he had gone eighty-four days now without taking a fish. In the first forty days a boy had been with him. But after forty days without a fish the boy’s parents had told him that the old man was now definitely and finally salao, which is the worst form of unlucky, and the boy had gone at their orders in another boat which caught three good fish the first week. It made the boy sad to see the old man come in each day with his skiff empty and he always went down to help him carry either the coiled lines or the gaff and harpoon and the sail that was furled around the mast. The sail was patched with flour sacks and, furled, it looked like the flag of permanent defeat.

The novella was about an old man who, after forty days of not catching a fish, goes out one more time into the endless blue and hooks a marlin. The marlin is the king of fish and this one is the king of kings. It’s hard to escpae the religious symbolism but dig a little deeper and one may discover a story of writing and the struggles to fend off ill-fortune.

This may have been the first book that I ever stole. I found it in the school library when I had just gone fourteen-years of age. I wanted so much to read it, but more than that, I wished to possess it. On that day, my little crime went unnoticed. The novella was hidden in my bedroom and I took it out secretively at night and read by torchlight. I still have it. And it still has me.

At the end of a long battle, in which the huge fish pulls Santiago further and further out to sea, the old man is able to triumph. Success is temporary and his victory, against a very worthy opponent, is snatched from him by fate that comes in the form of sharks. Only the bones of his incredible deed still cling to his skiff as he finally reaches shore; his white sail announcing his defeat.

You can take the novella anyway that you like. Some wonder if the old man dies after that whilst others marvel at his resilience. At fifty-nine Hemingway went into a shed in his garden, took out one of his shotguns, sat down with his toe on the trigger and the barrel in his mouth and…

My ending has the two old men going out, once more, into the big blue and catching that elusive good luck, fending off any bad luck that wants a free lunch, and coming back to show the waiting public that they are still the men.

This is my marlin, Please read.