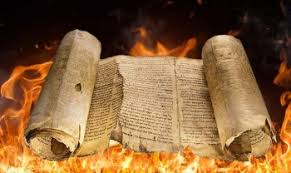 From The Purge Part 2

The flames had licked the door, had kissed the timber and had crawled upwards. Tiny flames becoming bold. He had watched them and she had watched him and the world had waited, breath held knowing what was to come. He had watched, happy for once that he had the power to control, to change the world, to do something right. And she had watched him, stood over him, frowned at his attempts to be more, had finally seen what he was and had screamed. She screamed when the recognition was wrenched from her being, as the flames danced madly around her and her husband, as the boy watched from across the road, filming for the world to see.

The snow was falling like ash as he lay down to die. The strange thing was that he did not now feel the cold, the freezing, biting, unforgiving cold. What he felt was heat, searing heat, licking at his blocks of feet, devouring his fingers and hands, dancing along his arms and reaching out towards his head. Heat that sprang from a thousand flames, each taking tiny bites, raking their punishment across his skin.

And now he knew that hell was waiting for him, had always been waiting. The woman was right. He was born for that place and he deserved it. The flames lapped along his broken body and prized open his soul. A tear escaped and partially froze. He was going towards his eternal torment before the figure, which had been watching him, pushed its way into his hiding place.