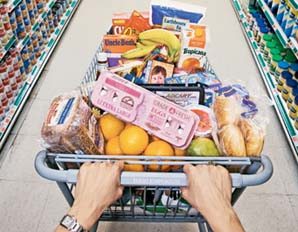 Sunday morning has arrived with another deluge. It’s been one long shower since the decision, “By the people”, to go it alone. We were up relatively early so that we could fulfil our parental responsibilities. I got the shopping adventure whilst my wife took our youngest one off to a maths class.

I always build in additional time and arrive early at destinations or meetings, just in case. With twenty minutes to spare, I was sitting outside our local discount supermarket and awaiting the opening of the doors. As I looked for something to read, I noticed other ‘just in cases’ arriving into the carpark. Just onto my second page of a book about running and personal philosophy, I was aware that the place was truly filling up. This was like Glastonbury for Sunday morning shoppers.

I was first into the carpark but second through the doors. I tried to make it look casual and attempted to saunter though the doors, unconcerned. Deep down, however, my competitive instincts were flaring up and forcing me to move at an enhanced speed. I had a list which had been thoughfully prepared by my wife. My job was to navigate the aisles to my bast advantage; no slip-ups, no idling, no missed opportunities. Sure enough, I had to double back for carrots and that lost me some ground.

Already, there were shoppers ahead of me, their trolleys strategically placed to block the popular foodstuff shelves. They know the game and they play dirty. I reached over one woman who had taken up guardianship of the chicken and turkey section; Sunday is a given for foul play. Whilst she was looking at her budget budgies, I made an open statement of my position within the Liberal elite and grabbed a free-range bird. Satisfied that I had established myself as a Remainer, I sauntered a little before realising that quite a few of the others had stolen a march on me. After all that I had invested, I could not have this snatched away from me. It was the carrots that had lost me this ground.

Not to be downhearted, I moved on and through the list. The Chanternay carrots were usurped by ordinary British ones. I made a note that I would have to get accustomed to this after the wonderous BREXIT is ‘done’. I wasted some more time trying to locate non-frozen Yorkshire puddings before deciding that the difference between the frozen and non-frozen was just a matter of degrees. Taking my chances meant that I risked my wife’s stoic displeasure for a better place in the checkout queue. With potatoes and parsnips in hand (or baskets), peanut butter being the non-palm variety, onions and milk that were not specified, bananas that were, chocolate bars that weren’t, and a final flurry of rosemary that I thought would ‘liberal-up’ the whole ensemble, I was ready to go. I’m not mentioning the two real ales that I slipped in.

A queue was already ten deep when I got there. The best laid plans went by the wayside. And then, as if by some divine intervention another checkout opened and, well, the rest is consumer history.

Just who would want to stand in the rain and the mud listening to a load of old indie when the competitive buzz of an Aldi shopping experience takes places under one roof?

One thought on “Discount Glastonbury…”