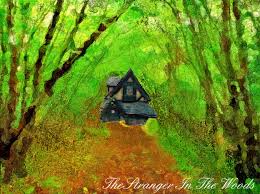 ‘A meditation on solitude, wilderness and survival.’

I had heard about this story only recently and it piqued my interest. When writing Read After Burnout, I had often considered what it would be like to escape from the mayhem of Everyday Madness. The fellow in the story, Christopher Knight, did just that, for three decades.

Knight lived on the edge of civilisation but remained unseen. He foraged and stole from houses and camps that were seasonal and he built a myth around himself through his ability to remain undetected. He was the yeti of Maine, a bogeyman of areas which had been peopled with bogey men by Stephen King. Yet this was a stranger who just renounced the way of the world, man’s world, and lost himself in the trees. I loved it.

Knight appears to have some autistic characteristics. He doesn’t like to look at people when he talks to them as their faces give him too much information. He doesn’t go in for the ‘huggers’ of the world, prefering a physical divide between people. For a man who spent his life tresspassing on private land and breaking into private property, personal space was paramount.

This is not a book to open the eyes of Desert Islanders whose dreams revolve around warmth, sun, sea, and the absence of annoying others. This novel is about the complete disassociation with mankind. That is apart from the items that can be obtained from people who have too much to notice. It is a spartan existence without even a fire that woud have kept him warm in the very coldest of winters. The fire would have been seen and that was a sacrifice not worth making.

We could all benefit from getting away from it all, but not for that long. Unless the world, shorn of its unnecessary accruements, leads to a more perfect existence ( I couldn’t explain that if ordered to at gunpoint).

Written with crystal prose, Michael Finkel’s book touches something of the Bigfoot in us all.