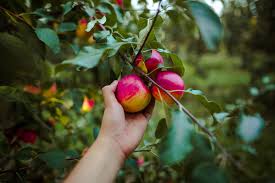 I have just stopped my morning’s writing but will be returning to it later as it is now flying along. My form of writing provides as many surprise to me as it does to the reader. When you are in the zone, it is like a fugue state, the world of your book is clearer than the one around you.

Anyway, see if you enjoy this short extract:

Mother stopped walking and held my shoulders squarely so that I was facing her.

“You must have had somebody at some time, Evie, or you wouldn’t have learnt to speak. You surprise me with your diction even though you rarely offer it.”

I could not answer her. There was no answer in my mind, although there had always been a thought lurking in the shadows. Mother sensed my unease.

We were walking through an orchard where apples, heavy on the boughs, shone back the sunshine from their reddening skins. The scent was a perfume I had never encountered before as the only apples I had seen were the small ones that clung to scrawny trees and tasted like the wood that had borne them. As if of its own volition, my had reached out and pulled one from a tree. I stopped and marvelled at its huge presence in the palm of my hand.

“Taste it,” Mother urged. “It may be a little bitter, we haven’t had as much sunshine as we ought to have had, but try it. See what you think.”

Lifting the strange fruit to my lips, the smell suffused my senses. My soul was salivating before the thing reached my mouth. And when my teeth sunk through the skin and into the flesh, I was in a place I never realised could exist.

I rushed into it, filling my mouth with its pleasures. Juice escaped and ran down my chin. I ignored this and continued. Finally, the thing was gone… all of it.

She didn’t have to ask if I had enjoyed it, but she did.

Mother began to walk again, a slow dawdle changed into something more purposeful. My legs, still aching from the time of inactivity, followed. We talked no longer as we followed a footpath that led us further away from the settlement and deeper into the fecundity of the fields. Plants that I had never seen before, tall grasses with yellow beads of grain reached over our heads. Mother seemed to nod towards them but continued along her journey.

Before long we were in a maze of head-high vegetation with each stem bearing fruit or flowers. Bees buzzed with a slow summer sauntering I had never seen before. They were fat and content, very unlike the angry insects I had sometimes happened upon in the hives hidden in forest branches. My initial caution showed in the way that I hesitated in my movement.

“It’s okay, Eve, they will not harm you unless you try to harm them,” she reassured.