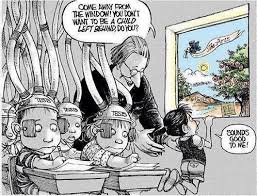 I wrote this post some time ago in response to some unfair treatment at the hands of the modern, mill-like, ‘educational’ sector. I was working as long-term supply teacher when I arrived after a half-term holiday (the one before exams) and was told that I wasn’t needed any longer. I felt both relief and injustice.

The world continues to turn with me doing very little ‘supply’, a term that is interchangeable with self-flagellation and spending time in the mediaeval stocks. Arriving early, I had time to kill, so I signed in, received my task sheets and set about seeing where my classes would be.

I felt uncomfortable being there as the academy is the epitome of everything that I despise about modern education. This place is for the least advantaged so they practise strict discipline and attempt lock-downs. They even have a person whose job title is ‘discipline for learning”. As I was walking around, I noticed doors opening and adult faces peeking out before quickly withdrawing into the darkness of their ‘learning spaces’. The nomenclature is important in case visitors are confused. A group of kids were playing hide-and-seek with an assistant head and they were winning. I was in a place of learning.

Not for very long, as I was called back to reception and told that they had over-booked supply teachers and I now was not required. Again, I felt relief.

They think that they have finally done it.

They have managed to make my head a vacant possession. They have reduced me to one of their non-thinking masses.

Their eyes have been following me. No, that is not quite right. My head is so empty now that it does not always remember the way things have been. They walk past my classroom door and peer in. A couple of the more empty-headed have occasionally stopped to walk into my room, as I am in full teaching mode, to talk to some students. There is no excuse me, sir, just a definite appropriation of territory.

The ones who do this are youngish, fat (flattish), dull as ditch-water, and stupid beyond reasonable imagination. If the Gestapo were to start up again, and it probably will, these would be the first on its list of recruits. Their incapacity for empathy aligned to their dullard adherence to whatever rules are in place at the time, would mark them out as ideal candidates. ‘The line of duty’ springs to mind. As a result of this, my resistance has been shaken into action.

I do little things such as trying to have fun in a lesson. Here I am not necessarily talking about a fun lesson for the kids, but one for me. I tend to find that if I am enjoying myself they have a good to better chance of doing so as well. I am not always right on this one.

The more I think about it, the more it appears to me that the whole department is built upon arrangements made after an army of invasion has established itself in occupation.

Above the tubby girls are two moderately aware practitioners who stick to the script. Their teaching goes nowhere without the appropriate PowerPoint. They do that whole cut and paste PowerPoint thing where massive chunks of text are squeezed onto each slide. After that, the person at the front (it used to be a teacher) reads each and every painful line as if delivering the commandments from on high. The kids get to copy off the PowerPoint rather than doing the shockingly old-fashioned thing of copying from the board.

Above these two guards is the leader of the department. Young, driven, smiling to the ones in favour, and to every child who crosses his ‘learning base’ threshold. He could be the manager of a factory or a supermarket. His job is to make the kids feel happy. He does that well. However, when he is not smiling, he is not smiling.

The three leaders of the small department are constantly telling others how good they are at the business of teaching even though the results don’t bear this out. In fact, these three are often telling everybody else how good they are at everything else. It’s a form of blessing that the school has them in the first place.

Oh, and let’s not forget the truly horrible woman who glares and glares at anybody not within her circle of trust. The circle of trust just happens to be those who she deems to be the most important members of the department, the leaders.

So, today I will go in and do my very best to wobble the cart. I am expecting to be marched off the premises by lunchtime and shot in the car park of the local supermarket.

When they read out my crimes against modern education, it will be from a PowerPoint; and it will be full to bursting.

2 thoughts on “Posts That Are Remembered…”