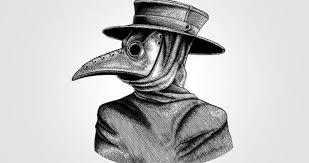 Just when mankind thinks it has beaten nature, a hand reaches out and pulls it back. The cracks in man’s armour become the gateway of invasion. This is what happened with the Black Death.

The fourteenth century saw the first cases of the Black Death. In the spring of 1348, a virulent strain of the plague landed on the shores of Italy unleashing a march of death that was unrelenting and unprecedented. In three short years, the disease had laid 25-50% of Europeans in their graves. Like the horsemen of the apocalypse, this plague rode in three. The most commonly known of the variants was bubonic plague which caused buboes and swellings that gave the tell-tale blackness which was to give its name to man’s scourge. This was the result of rat infestations, particularly the Black Rat, Rattus Rattus, which had made their way from Asia stowed away in cargo ships.

In the case of the Black Death, bubonic variety, it had been the oriental rat flea which had migrated with its host towards a wider feeding ground. Yet, even the fleas could not be held wholly responsible as they too had been infected with what was the real cause of the pandemic. A deadly bacterium, Yersina Pestis, had stowed away in its host in the same manner as the fleas had in theirs and the rats had done within the cargo ships. It was a general piggy back to oblivion. At the end of a successful campaign, the humans died of the disease, the rats died of the disease, the fleas died once they had run out of hosts. Nevertheless, the rats got tagged as mankind’s eternal enemy.

Pneumonic plague gained a much lesser press yet was more deadly with its spread being limited only by the air. As an airborne infection, it decimated closely knit populations closing off the escapes before anybody knew of its existence. The life expectancy of its victims was one to two days.

The last strain of the plague was the one which relied upon a flea bite that allowed the bacteria to enter the bloodstream immediately, killing its victim in just a few short hours. This was the septicemic plague which was, indeed, a kiss of death.

It was the ferocity of the diseases that caused most panic as whole communities could become extinct virtually overnight. Many saw its visitation as divine retribution. Mankind was finally being punished for the crucifixion of an itinerant carpenter and teacher. God was not only great, but he was vengeance, collecting payment for a treachery that was hidden in the dreams of the unworthy. Some cities, however, appeared to be peopled with more worthy citizens than others and, as their due, suffered less (the percentage of deaths varied from between 10-50%).

The immediate aftermath of such a cataclysmic event was again threefold.

Some people thought that positive avoidance would enable them to survive. People locked themselves in their homes or fled the city in order to find areas of isolation. Towns and cities became empty whilst some villages ceased to exist entirely.

Another effective course of action was thought to be the adherence to a moderate living where the avoidance of superfluity would keep them from the epidemic. These people formed themselves into small, self-contained communities, avoiding the sick and taking only the best food and wine. Excess was avoided but music, art and poetry were staples of their survival strategy. Many, believing that the end of days was at hand, took to the remainder of their time on earth with an abandonment not seen since the fall of Rome. Drinking fuelled behaviour that would know no repercussions for the priests were dead or in hiding, and the same was true of any other authority. Even God Himself was probably no more, so there was no limit to the kinds of bestial behaviour that could be enjoyed.

Then finally, there were the pragmatists who followed lives midway between the two previous paths. Taking drink and food, as they saw fit and going about their business in a manner that still retained elements of normality. Yet these were definitely not normal times. For the most part, the poorer members of society suffered in silence. Receiving no care or attention, they remained in their houses, their deaths only detected through the cloying smell of their decaying bodies.

One wonders whether the citizens of Messina, Sicily, way back in 1347 ever realised, as the black rats ran from the first ships, that what they were seeing was the beginning of an apocalypse.