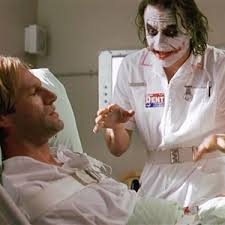 Her big head appeared before men. Hubble bubble, I was in trouble. I had been caught in the act. The urine was already cooling around me and no longer offered any comfort. Perhaps, I was happy to be chanced upon by these two trolls.

“No problem. I just wanted to put myself in this position whilst I was pissing myself. I often find that around this time it is better to do this rather than to carry on sleeping.”

I was at their mercy and they delighted in this. I had never given much time to the idea of ordinary psychopaths, but now I was faced with one. The big head was the leader and her little helper her companion in cruelty. There was a snigger of a shared comment that registered on my radar. They were laughing at me.

“I’m glad that my pain gives you something to find amusing.”

“We weren’t laughing at you,”  the concrete face said.

I wanted to raise an indignant voice, throw accusations and shame, but I couldn’t. My ribs were broken, my clavicle smashed in two places, and my lung was collapsed. I was a victim who was as helpless as helpless gets, and a couple of casual psychopaths had wandered in on me during the course of the night.

Somehow, I survived their visit. I was able to put their derision behind me and struggle into a new day. It was a passing nightmare, a reminder of the deep-seated cruelties that exist in some prehistoric personas. I would leave this behind when eventually I was released from recovery, and I would leave others to experience the dark pleasures of the midnight trolls persecution; carrion picking over the not dead corpses of the ward.

Covid was not on the ward. Hull was a backwater which was not a centre of communications. People lived in Hull and people went to Hull only if they had a reason. We had known somebody who had died from it. That was a sudden death, a snatch-theft, that left the family and those around them reeling from the audacity of the disease. If it could act like that, in broad daylight, it could do as it wanted. There is a scene from a Batman film in which The Joker jaunts his way through a ward, a painted smile hiding the obvious menace. If Nurse Fat Head was a dread, Sister Covid was the prophesy told in Revelations. But Covid was not on my ward and that left the days to be consumed by that aching monotony that feeds off reluctant recovery.

Monotony settles like a sheet across the waking hours of the ward. It’s a long day with patients being prodded awake with offers of tea and coffee. After that, it’s cereals or toast. I accepted tea, strong with only a little milk, but did not partake of any solids; my wife had provided me with a bag of chocolate biscuits. Each offer and refusal seemed to be recorded on a ledger concerning my awkwardness. And so it became apparent that some of the staff had decided that I was not playing the expected role of grateful patient and this, with the eyeball rolling and sighs of discontent, would plague my stay. As an outcast, I decided to keep myself to myself. No cheery chats or enquiries as to how their days were progressing. I was here for one purpose and that was to make a very speedy recovery then get out of there.

Covid meant that visitors were not allowed. I was on my own, in foreign territory, with my wife providing drops of supplies. I gave her my wish list and she went out and got it. Sometime in the afternoon, she would fly over and drop my requests so that I was able to wear something other than the cycle shorts I had arrived in. She also attempted to supplement my food stuffs with juices and salads, so much so that I began to possess a larder that was in danger of filling my entire bedroom area. I was trying to establish something that got close to normality. Being alone each hour of the day was as abnormal as it could get. Okay, I had the care staff, and the midnight trolls, but apart from that there were only phone calls enhanced by Facetime. One of these calls resulted in some new sets of bed-wear that would help to save my cycling shorts from the ferocious blades of the physioterrorist’s scissors.

Sunshine, clear yet cold. A country road empty of traffic other than that which had feet or bicycle wheels. It was the height of the virus, the death-rate climbing uncontrollably towards what had been promised as the peak. They kept putting the arrival of the peak back; things were not playing out the way they had decided that they would. It was not plain sailing, a straightforward rendition of how such a virus was supposed to behave. The stage was taken over by tragedy, those little individual demises that were hidden in ever-growing fatalities. The daily updates had changed in tone since the Prime Minister had been taken off with a convenient dose of IT’s Storm-troopers. Alongside the battling bull-shitter, the Praetorian Guard fell in choreographed calamity. The nation was in peril with our chief defenders down and supposedly out of the fray. I chose to cycle as a way of building up my resources if IT managed to land near to home.

I was on the road again. The clear sky had been crowded out by the first branches and early spring growth of leaves. The adjective is dappled. Dappled belongs to horses, soft pony colours that can be found in painting-by-numbers kits, number 7 brown, number 8 white, number 8 both brown and white mixed. At this stage, the painter needs to step back to appreciate the effect; the light is fading and the detail difficult to spot. From light to shade, my bike moved forward without any added caution.

It was a Sunday morning, the first promise of spring, the beginning of new growth, a canopy under which to shelter.