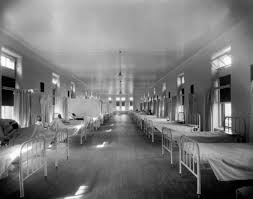 Monotony settles like a sheet across the waking hours of the ward. It’s a long day with patients being prodded awake with offers of tea and coffee. After that, it’s cereals or toast. I accepted tea, strong with only a little milk, but did not partake of any solids; my wife had provided me with a bag of chocolate biscuits. Each offer and refusal seemed to be recorded on a ledger concerning my awkwardness. And so it became apparent that some of the staff had decided that I was not playing the expected role of grateful patient and this, with the eyeball rolling and sighs of discontent, would plague my stay. As an outcast, I decided to keep myself to myself. No cheery chats or enquiries as to how their days were progressing. I was here for one purpose and that was to make a very speedy recovery then get out of there.

Covid meant that visitors were not allowed. I was on my own, in foreign territory, with my wife providing drops of supplies. I gave her my wish list and she went out and got it. Sometime in the afternoon, she would fly over and drop my requests so that I was able to wear something other than the cycle shorts I had arrived in. She also attempted to supplement my food stuffs with juices and salads, so much so that I began to possess a larder that was in danger of filling my entire bedroom area. I was trying to establish something that got close to normality. Being alone each hour of the day was as abnormal as it could get. Okay, I had the care staff, and the midnight trolls, but apart from that there were only phone calls enhanced by Facetime. One of these calls resulted in some new sets of bed-wear that would help to save my cycling shorts from the ferocious blades of the physioterrorist’s scissors.

One thought on “Not Out…”