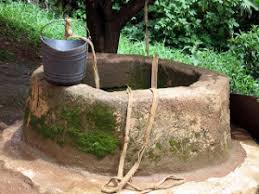 There was once a wise king that ruled over his people who resided in a vast citadel. The king was feared for his might and admired for his wisdom. And all his subjects revered him.

The citadel had one source of water which was a well in the centre. In the mornings people would gather to pull fresh water from the well and in the evenings they would sit around it in the shade of palm trees. They would chat, share the wisdoms of their king and says thanks for the fact that they lived in such a peaceful place, at such a peaceful time.

But like all good tales, there was darkness waiting beyond the safety of the text.

Somewhere in the wastes, a dark shape was forming and, as the storms began to blow, it moved ever closer to its goal.

With winds and sand battering the walls of the citadel, the citizens took to their homes and locked their doors. Window shutters were bolted into place and the people of this great city settled down to ride out the worst of the tempest. Nobody chose to sit around the sacred well that evening.

During the night, the storm tore at the nerves of the populace and shredded their sleep. Nobody could ever remember such an event as this before. Nothing, not even in the ancient texts, could have matched the ferocity of this night. Eventually however, sleep came and the storm went.

The morning woke with a new day. The clouds of sand had travelled onwards to torment others and the world, though now laden with foreign sand, was returned to itself. The well, well it to had been affected. The last person to leave it the night before had been so afraid of the sandstorm that they did not properly secure its covering and this meant that a considerable quantity of the night’s detritus had become deposited in its confines.

The King shook his head at the state of things and warned his subjects that it would be unwise to drink from the ancient source. He told them that he would send out the city guard to find new sources of water that could be consumed whilst it could be determined if the well was still…well, safe. His people, who had always trusted him, were parched from the  night spent surviving the storm and some crept up to the well at the onset of dusk and began to fill their buckets.

“The King thinks that the well is poisoned,” they whispered, “but maybe it is his own wisdom that has grown sick.’

The next morning, a much larger crowd had gathered and the voices were not so whispered.

“The water tastes good. Here, try some. It is the King who is trying to keep us away from it, so that only he can drink from its depths.”

And word spread of his trick and the people, no longer his people, talked of ways to replace him.

“Why have a King who no longer thinks like his people?” they asked.

In the cool night breeze whilst waiting for his guards to return, the rumours floated towards the King’s residences and he became fearful of their intent. So, that evening, he set off from his courtyards and walked slowly towards the centre of the citadel in which the well was to be found. As he made his way with a golden goblet in hand, the voices stopped and all eyes followed.

A great crowd had gathered at the well to watch the once mighty king follow the popular intent. They watched as he slowly lowered the bucket into the confines of beneath and raise it so that he could dip his goblet into the golden liquid. Before he managed to get the vessel to his lips, he thought that he noticed the faces of demons surrounding him where once stood his beloved people. Nevertheless, he continued and took a fulsome draught of the well’s secrets.

His eyes were the first things to change. He had seen beasts, but now he too was a beast and the world around him rejoiced. The King was wise once more.

On their way back to the citadel, the guard heard stories of a strange walled city in which all the inhabitants had become things of madness; even the once wise king. It broke their hearts not to return to the place they had once called their home, but they rode on and found new places to live.