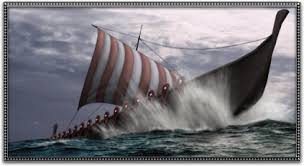 Eternity comes in many sizes. Ours was surprisingly longer than I had guessed. We must have travelled for mile upon mile. I was aware of landmasses by which we were channelled. Stands of trees, forests and mountains came and went as we continued our journey and I remembered watching, from a secure height, the mayhem that was engendered by such storms. I had seen boats smashed against rocks, huge iron monoliths dragged up from the depths and sailing once more, their ghost crews long since submerged. Once I had seen a whole house carried as a war prize and its inhabitants staring out into an indifferent sea, accepting that which was not to be negotiated with. Whether it was my boat handling or whether it was luck, or even the half-believed prayers of Mother, I do not know. One moment were racing along with the death howls of the sea and wind around us and the next we were drifting on a suddenly calm stretch that was retreating from the land.

I turned towards the others and in the boat for the first time and was more than relieved to see that they were all there. The sea had claimed none of them.

“Now we must row for our lives,” I shouted.

Their expressions told of confusion. Surely they had been spared.

“This is the most dangerous time. The waters are merely breathing in. If we do not strike out we will be dragged back in and swallowed up. Do you understand?”

And we did row. And the waters did return for one lasting ovation before the world started to become revealed once again. With the waters seeping back towards the sea, we were left grounded on a mound that we later found to be a small hill.

“This is what God gave Noah,” Mother issued through tears of happiness. “We have been saved through the will of the Lord and he has given us a fresh start.”

For the younger girls, this seemed to work. For the rest of us there only remained a deep fear of the random nature of death. We looked around across the now resting world and saw nothing of our companion boats. What was left standing were mere reminders of the devastation that had been visited upon the world. Eventually, it was safe for us to climb out of the vessel. I thanked the hunters for building such sturdy boats.

It was something that belonged to the other world.

What they were looking at defied any understanding. This was not just a thing form the old world, it was a thing from another world, one that was completely alien to their own. What Evie could see was a mass of stone and brick. Brick, she knew, was the material that they had used to build their homes. Before her was brick upon brick, house upon house, floor upon floor. And between them were rivers of trees and bushes growing steadily into the city’s fabric.

“How did they live in such places? There is no space.”

“People lived close to each other in those times. They felt safe. They liked the fact that they could get everything from close by.”

“But where did they hunt?”

“They didn’t. They bought everything from shops.”

“They were places that sold food and clothes and everything else that was needed.”

Mother paused. She knew that she could not answer. For everything that the other world had it did not have the stillness of the Garden or the wildness of the Margins. Evie’s face was sceptical. She wanted to avoid that place with every bone in her  body. For her, it was a suffocation of life, an overbuilt trap for vermin.

“There are stories about this place. They say that it is home to ghosts. The ones that died in the great wave. I have heard that to go there is to give in to madness. There are bad spirits that want to feed off the living. They take their mind, eat them from within. We should not go there.”

I looked at Mother and saw that her mind was set.

“We have to go there. We have no food or water. There may be some down there, something left over from the old times.”

“But how? The food would be rotten, the water stagnant.”

“In those days they had ways to preserve those things. Tins and bottles. The would be way past their sell-by-date but I’m sure the would be of no real danger.”

“They will have to put up with us.”

After checking that everyone of us was safe to walk, we set off. The ground reacted to my steps differently. It felt like I was treading water and that each footfall was landing on something that could not be fully trusted. Mother must have seen this.

“You still have your sea legs.”

“Yes. Your body adjusts to its surroundings relatively quickly. Your brain is telling you that you are still at sea but your feet are telling you something else. It will take a little time before they come to an agreement.”

As usual, Mother had the capacity to surprise me with the depth of her knowledge. First it was the city and then it was the sea legs. For a woman who had spent a major part of her life in the Garden she sure knew an awful lot about what went on outside of it.

“How do you know about the city?”

I have known about cities for a long, long time. When I was younger, they were my life. I loved city life, all the shops, bars and restaurants. I loved the streets that never seemed to sleep, and the museums and art galleries. Cities were once the crown of our civilization, places of learning and leisure. They were the melting pot of society and even thought there was an imbalance in wealth and opportunities it was as if we were one. We were one for a long time before the terror and the tidal waves washed us apart.”

I had never heard anyone talk about the time before like this. Nobody that I had come across was old enough to have an experience of that past world. I had reckoned that Mother was old, but had not reckoned that she was ancient.

We were now descending into forest. A forest that had trees that I had never seen before. They had large broad leaves that grew towards the top of their trunks and this acted as a roof that blocked out any sun that may have been lurking. The air was thicker here; as if it was a thing rather than an idea of a thing, And the heat, i had never before experienced the like of it. The same was true for all of the others apart from Mother.

“It’s warmer here because we must have been pushed south. The south has always been hotter than the north, or should I say the closer we are to the equator the warmer it gets. We should also see the sun better. With a little luck.”